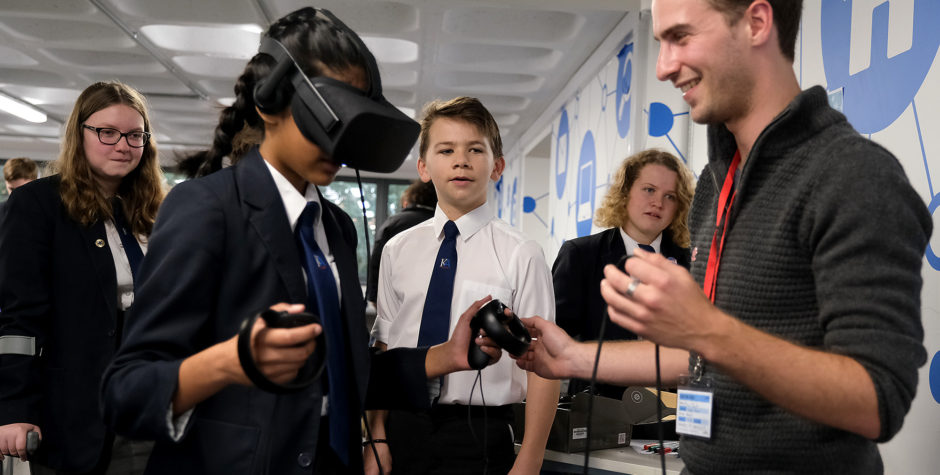 Marcus Taylor, CEO of Venture Harbour, which is based at Howbery Park, has launched a community engagement programme as its portfolio of online businesses continues to flourish.

The 1-1-1 programme commits to give at least 1 per cent of product, profits and time to NGOs, students, charities and great causes. Marcus has also become the youngest Patron of the Prince’s Trust, investing £100,000 as an Enterprise Fellow to help support the next generation of entrepreneurs.

Venture Harbour has expanded rapidly from one employee to a core team of six at Howbery, plus a number of freelancers. The digital innovation studio was named this year as the 22nd fastest growing technology company in the Deloitte 2019 UK Technology Fast 50. The company has doubled its turnover year-on-year and has a portfolio of ventures valued at over £10 million.

To launch the 1-1-1 programme, Marcus returned to his former school in Wantage to encourage students to embrace artificial intelligence, the Internet of Things and virtual reality.

“Today’s event has allowed students to interact with different technologies and garner an appreciation of some of the real-world applications of these technologies, bringing much of what we talk about in lessons to life,” said Harkit Sandhu, Head of Business, Computer Science and Economics at King Alfred’s Academy.

Marcus Taylor built his first computer age 10 and taught himself to code by building websites for bands. He has since won numerous entrepreneurship awards, regularly speaks at conferences such as TEDx and has been featured in the Forbes 30 Under 30 Europe and a Winner of ‘Young Entrepreneur of the Year’ at The Business Excellence Forum.