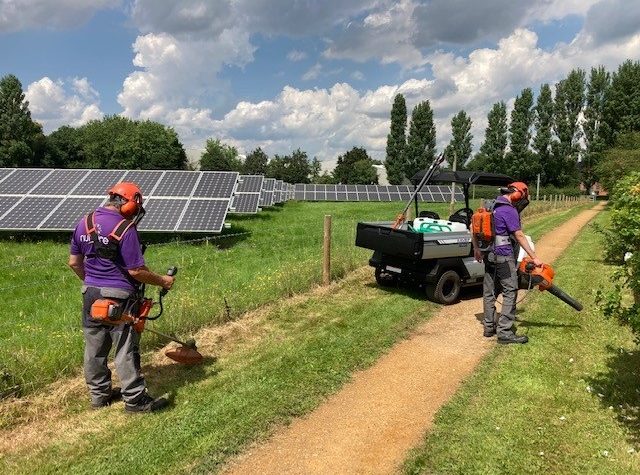 Our grounds maintenance team, Nurture Landscapes, has begun using new battery powered equipment – which can be charged directly from the park’s solar panels – to reduce our fossil fuel consumption.

The new additions to the park include electric hedge cutters, strimmers, leaf blowers and a Yamaha UMX Electric Utility Vehicle.

“The new electrical equipment will dramatically reduce the team’s fossil fuel usage,” said Nurture Landscape’s contract manager, Robin Sergi. “This new equipment is particularly useful for our work at Howbery, as it is extremely quiet which makes it less disruptive to the wildlife. This also makes it suitable to use in areas of the park which are close to conference halls and offices.”

Nurture Landscapes, which has been maintaining Howbery’s grounds since 2014, has rolled out electrical equipment to other sites it manages too. This completes one of the  planned phases to be carbon neutral by 2030.

“Nurture has exciting plans for Howbery Park in the future,” said Robin. “We are currently having discussions about adding an operator free, robotic grass mowing machine to the site. This machine has the potential to be controlled by satellite technology and could also be charged directly from the park’s solar panels.”

Donna Bowles, Howbery Park Estates Manager, said: “Howbery Park was the first solar powered business park in the UK. It is excellent to see the ground team putting some of Howbery’s solar energy back into maintaining our wonderful grounds.”