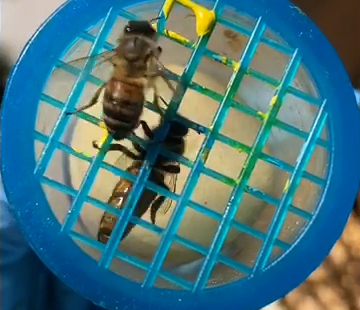 New queen bees bring back buzz to our hives

The prolonged period of rain earlier this year led to three of our honey bee colonies perishing, but, thanks to three new queen bees, the hives are now buzzing again.

The bees are an important part of the our commitment to biodiversity and sustainability, so it was a big blow when just one colony out of four survived the prolonged wet period. Luckily, help was at hand from beekeeper Robin Sergi from Nurture Landscapes (which looks after the grounds and bees) who decided to try and repopulate the empty hives using the surviving colony of bees and an artificial swarming technique.

Robin split the colony between two hives, so that one colony found itself without a queen, prompting its worker bees to develop a new one. Through a process of selecting a number of viable eggs, nurse bees feed the larvae a diet richer in royal jelly than that of the other worker larvae. It then takes around another 16 days for the adult queen to emerge.

He then repeated the process to create a third queen bee from the surviving Howbery colony. For the fourth colony, he used his own hive in the New Forest to develop another queen, which he then moved with a colony to Howbery.

“I’ve never tried to do this before, so I was thrilled to find that it had worked and that we had new queens in the hives.” explained Robin. “It is often seen as easier and quicker to buy in a new queen with colony, rather than develop a new queen from your own stock.”

“We are just hoping now that the bees can make sufficient honey in the remaining months to help them survive the winter. We won’t be able to remove much honey from the hives to sell this year – we have extracted a small amount from the surviving colony.” 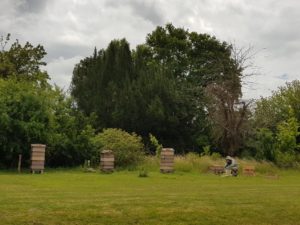 The Howbery bees have typically produced around 70 jars of honey since the bees were introduced in 2016. Robin regularly runs bee-related events, such as honey extraction, for the Howbery Park community.

Donna Bowles, Estates Manager, said: “We are so pleased that Robin has managed to develop new queen bees, and that our hives are thriving again. Our community has really embraced the honey bees since they have arrived – our bee-related events are always extremely popular. This year, Howbery Business Park is also championing bumblebees as part of its commitment to support biodiversity.”